This project is ongoing, but monitoring determined that no issues with movement on the project to date. The data is valued by the stakeholders and will be used in the event of a conflict with other parties if necessary. The data from RST’s instruments was collected with data loggers in real-time and made available to the project team on a privately accessible website.

Pier West by Bosa Development is a prominent high-rise and waterfront development in New Westminster, B.C. The two 53-story, residential buildings will be the final piece of the waterfront’s revitalization when completed. Set in an 11-acre property, Pier West is fronted by the Fraser River and is bordered in the north of the property by a busy rail line utilized by the Canadian National Rail, the Canadian Pacific Rail, and the Southern Railway of British Columbia.

In order to ensure the construction activity did not adversely affect surrounding rail tracks and buildings, an instrumentation plan was developed to monitor the site during the construction of this development. The project is made up of two high rise buildings with an over 11-acre park on New Westminster’s boardwalk. 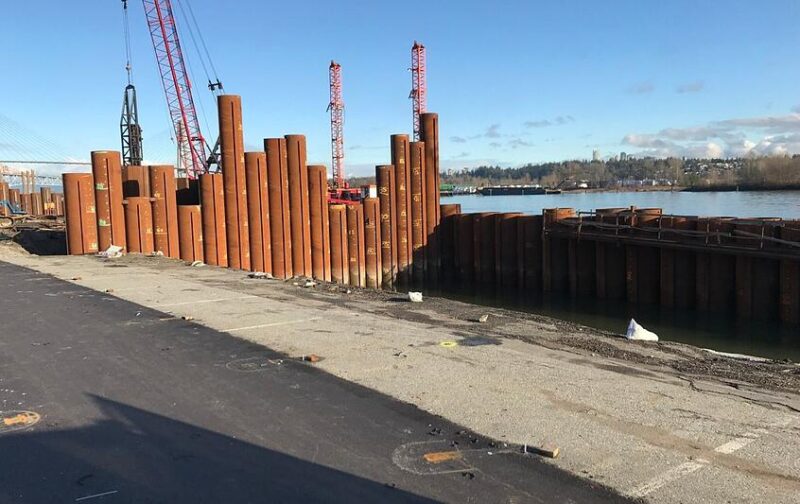 Work on Pier West occurred on a busy and densely developed location at the waterfront of New
Westminster. The site is bordered by the Fraser River and a vital rail corridor. Monitoring the impact
of excavation on the infrastructure around the site was important.

Digital in-place inclinometer systems (IPIs) were used to monitor inclination at key locations in the shoring walls. This helped to manage risk, confirm design assumptions, and to mitigate possible impacts to adjacent structures such as the Fraser Discovery Centre. In addition, the data collected before, during, and after construction provides the client with documentation in case conflict arises with other stakeholders. The data can be used as evidence that damage was not caused by the owner.

Large project in a densely developed location. The site is between the Fraser River and a major rail corridor. Monitoring the impact of the infrastructure around the site was important. Access next to the Fraser River was difficult. A boom lift had to be used over the water for installing instruments due to access challenges.

The customer determined that IPIs and VWA load cells would meet their monitoring requirements. Twelve IPI strings were installed into 70 mm Snap Seal inclinometer casing, along with eight vibrating wire load cells. Each Inclinometer location is approximately 40′-50′ in depth. The data from the instruments was collected with data loggers in real time and made available to the project team on a privately accessible website.

RST Instruments provided IPIs that are accurate, reliable, and familiar to GeoPacific.

Partners Featured In This Success Story

GET YOUR OWN COPY OF THIS SUCCESS STORY